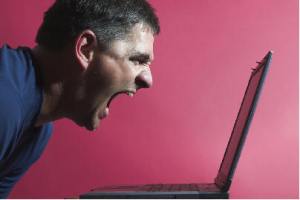 Participating in NaNoWriMo, so far, has been a day-by-day learning experience, with a huge curve. One of the largest learning curves was learning to deal with this horrible disease we aspiring writers call “Writer’s Block”. I’ve discovered four strains of the disease, which each effected me in turn in my attempt to write my first novel.

At a book signing last year, Brandon Sanderson did me a great service by assuring me that I could make a living at this, if I had a passion for it. He also wrote in my book “BICHOK – Butt in Chair, Hands on Keyboard”. It’s the only way books get written – quoting Dave Farland, “No one’s going to knock on your door and ask you to write a book”. These anecdotes helped me get started, but when I got down and dirty and actually was writing, I began to become intimately familiar with Writer’s Block. After all, no one knows the strength of the river like the salmon who travelled uphill through the torrent. And no one knows writer’s block like a writer that finished something.

In order to stay up-to-date on my word count, I had to find a cure to each strain. Though I hope my own experiences may be useful to others, I give them with a caveat; I don’t believe in “following the muse”. I used to, until I realized that if I only wrote when the muse was with me I’d write exactly one book in my entire life. If that. After reading the experiences of other authors I began to realize that almost none of them only wrote when they felt inspired. The rest of the time, they put the work in, knowing that it would have to be revised later. And after ten revisions, most claim they can’t tell the difference between the parts they fabricated painfully, with blood and sweat, and the parts that came flowing instinctively.

This type is the most familiar to us writers. It’s naturally inherent to beginnings, to tackling a project you’ve been meaning to get to forever. It’s approaching a mountain you mean to climb, and staring at it dumbfoundedly. Or, it comes on a day where you feel particularly tired, worn from life’s troubles, or distracted.

Cure; There are really only two options. Make the decision that you’re not going to write right now, because other things need to get done. Yes, this is a valid choice – and making that choice proactively is always better than just “putting it off”. The other decision is; realize that if you ever want to get paid for this, you have to get in the habit of treating this like a job. You need a rough draft to revise. You need a revised draft so you can trim and perfect it. You need a polished draft to send to editors. And you need all of this as experience so you can grow and become a better writer!

This type comes when you’ve already dedicated yourself to the task. You’ve put on your music, shut down your internet browser and other distracting programs, and your hands are poised at the keyboard; but something hangs you up. If you’re really determined, you squeeze out a couple sentences, then commence a staring contest with your screen. The screen wins (seeing as it can’t blink for lack of eyelids) and you go get a snack.

Cure; Stuck on a name, technical detail, or history reference? *Putsomethingtherefornow* and come back to it later. You kind of have to tell your internal editor to jump off a cliff there. Asterix (*) are perfect for a Ctrl-F search for later. If you are stuck because you genuinely don’t know what to do in the next scene, jump forward and write the next scene – the one you’re looking forward to. After that’s done, it is much easier to see what must happen in order to bridge the gap.

Type 3 – “Something’s wrong with the story!”

This strain is almost a split from Type 2, and in the early stages, rears it’s head the same way. However, on closer inspection (and with grim determination to finish a rough draft) you realize… you’re trying to make a character do something against their nature, or you’ve deviated from the plot, or something else is wrong with the story.

Cure; Do a quick seven-point outline. Identify the important story points and themes. Are you dwelling on a point that is less significant? Are you taking the story on pointless “Tom Bombadil” journeys? Does the outline itself need to be tweaked or adapted to changes you’ve made while writing? How WOULD your character react to this or that? Stand back and take a look at the big picture, and you may realize something needs tweaking. Then get back on track.

This strain is rare, because it means you’ve been writing. In order to bring this point home, I’m going to post a pep talk written by Neil Gaiman; He explains it better than I can.

By now you’re probably ready to give up. You’re past that first fine furious rapture when every character and idea is new and entertaining. You’re not yet at the momentous downhill slide to the end, when words and images tumble out of your head sometimes faster than you can get them down on paper. You’re in the middle, a little past the half-way point. The glamour has faded, the magic has gone, your back hurts from all the typing, your family, friends and random email acquaintances have gone from being encouraging or at least accepting to now complaining that they never see you any more—and that even when they do you’re preoccupied and no fun. You don’t know why you started your novel, you no longer remember why you imagined that anyone would want to read it, and you’re pretty sure that even if you finish it it won’t have been worth the time or energy and every time you stop long enough to compare it to the thing that you had in your head when you began—a glittering, brilliant, wonderful novel, in which every word spits fire and burns, a book as good or better than the best book you ever read—it falls so painfully short that you’re pretty sure that it would be a mercy simply to delete the whole thing.

Welcome to the club.

That’s how novels get written.

You write. That’s the hard bit that nobody sees. You write on the good days and you write on the lousy days. Like a shark, you have to keep moving forward or you die. Writing may or may not be your salvation; it might or might not be your destiny. But that does not matter. What matters right now are the words, one after another. Find the next word. Write it down. Repeat. Repeat. Repeat.

A dry-stone wall is a lovely thing when you see it bordering a field in the middle of nowhere but becomes more impressive when you realize that it was built without mortar, that the builder needed to choose each interlocking stone and fit it in. Writing is like building a wall. It’s a continual search for the word that will fit in the text, in your mind, on the page. Plot and character and metaphor and style, all these become secondary to the words. The wall-builder erects her wall one rock at a time until she reaches the far end of the field. If she doesn’t build it it won’t be there. So she looks down at her pile of rocks, picks the one that looks like it will best suit her purpose, and puts it in.

The search for the word gets no easier but nobody else is going to write your novel for you.

The last novel I wrote (it was ANANSI BOYS, in case you were wondering) when I got three-quarters of the way through I called my agent. I told her how stupid I felt writing something no-one would ever want to read, how thin the characters were, how pointless the plot. I strongly suggested that I was ready to abandon this book and write something else instead, or perhaps I could abandon the book and take up a new life as a landscape gardener, bank-robber, short-order cook or marine biologist. And instead of sympathizing or agreeing with me, or blasting me forward with a wave of enthusiasm—or even arguing with me—she simply said, suspiciously cheerfully, “Oh, you’re at that part of the book, are you?”

I was shocked. “You mean I’ve done this before?”

“Oh yes,” she said. “You do this every time you write a novel. But so do all my other clients.”

I didn’t even get to feel unique in my despair.

So I put down the phone and drove down to the coffee house in which I was writing the book, filled my pen and carried on writing.

One word after another.

So keep on keeping on. Write another word and then another.

"I'm a writer? I write, with pen and parchment?!" - A Knight's Tale View all posts by Samuel Loveland